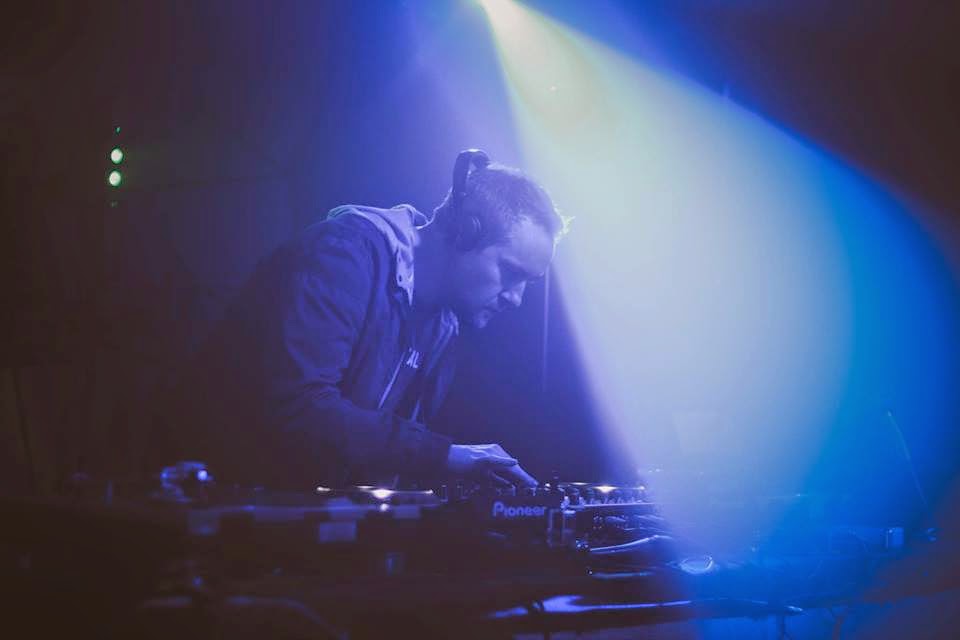 Future Engineers is a name that needs no introduction - especially if you have been into atmospheric drum & bass for more than a while. The project is now run solely by Lee Batchelor. He was kind enough to spare us a bit of his time and answer a few questions we prepared in the form of an interview. Here are a few words on the current condition of the drum & bass scene, on inspirations, on the plans for the future, and on the mix recorded especially for atmoteka by the man himself.

atmoteka : Talking about the ‘here & now’, do you personally enjoy the course that drum & bass has taken in recent years ?

Future Engineers : I think the drum and bass scene is really healthy at the moment and has been for a long time. For me it’s still the most exciting music to write, I don’t get the same buzz from producing other styles of music.

atmoteka : Did you imagine drum & bass to evolve the way it has ? Or are you actually more surprised/disappointed/happy with the way things turned out ?

Future Engineers : It’s great how diverse the scene is and a lot of producers and labels are releasing music across the full spectrum of drum and bass.

atmoteka : As one of the ‘godfathers’ of the more techy atmospheric side of drum & bass, do you think that there is a room for this type of drum & bass on the market of today ?

Future Engineers : Godfathers? Haha. The scene always tends to come round full circle, there’s always been a techy side to dnb and new producers are incorporating the atmospheric sounds again, it just needs to be updated to fit in with the latest production styles.

atmoteka : When you get yourself ready to get down to producing music, do you listen to drum & bass in search of inspiration, or do you rather look for input in other genres ?

Future Engineers : I do listen to other styles of music for inspiration but I also think it’s important to keep your ear to the ground in terms of what’s happening in the current drum and bass scene, what styles are working in the clubs etc.

atmoteka : Would you agree with the statement that today’s music market is more about quantity than quality ?

Future Engineers : There’s definitely more quantity out there now due to accessibility and there’s less of a need for an established label to act as a ‘Gate keeper’ therefore the quality control can tend to suffer a bit.

It’s a level playing field now with the Internet and the technology at your fingertips. There’s nothing to stop you getting your music out there and promote yourself as long as you keep that internal quality check at your highest standard.

Future Engineers : Christ, I’m starting to feel really old now! Lol. I personally don’t make a living from making music and I guess it can depend on what style you make, how motivated and disciplined you are to treat it as a full time job and really know the business side of things. The Djing can definitely help if you have a good profile and an established label.

atmoteka : Can you imagine yourself producing any other type of music ? Have you actually ever tried your hand at any other musical genres ?

Future Engineers : I think, as you get older your taste in music matures and you want to experiment with new styles. There certainly can be a benefit to writing other music so you have a fresh approach to an idea when working at a slower tempo for example. I’ve written a few non-dnb tracks in the past, but nothing that’s been released to date.

atmoteka : If you could name 5 albums that have been the biggest inspiration to you – off the top of your head, what would they be ?

Future Engineers : I’m quite bad with naming specific albums but in terms of producers, there’s been a handful that have inspired our sound over the years like, Photek, PFM, Blame, Global Communication, Teebee, Hybrid.

atmoteka : Are there any names or labels on today’s drum & bass scene that you try to be up-to-date with ?

Future Engineers : A lot of the producers and labels that feature on the mix are a good representation of the stuff I’m feeling at the moment.

atmoteka : Recently you've moved to Melbourne. Tell us about your life in Australia. Does the new location have an influence on the music you produce ?

Future Engineers : I now live in Elwood near St Kilda in Melbourne, which has a very similar vibe to Brighton in the UK where I stayed for 4 years. The drum and bass scene seems pretty healthy here; there’s always nights going on with UK headliners coming over. There are some wicked producers that are based here too like Safire and Nocturnal who both represent the harder style of drum and Bass, so maybe their influence may toughen up my sound a bit…

atmoteka : What are your plans in terms of releases/music production for the nearest future, and what are your plans regarding Transference Recordings ? Is there any solo album of yours to finally see the light?

Future Engineers : I am currently getting the website rebuilt and have a few new releases being finalized at the moment so I plan to have things rolling before the end of the year. It’s too early to be specific but I’m looking forward to getting the label moving again…

atmoteka : To sum up, could you tell us a bit about your mix for atmoteka ?

I recorded the set using Serato and I feel with the mix I’ve kind of gone full circle in terms of the selection. The majority of the tracks are released and cover the spectrum of artists and labels that I follow in the scene. It reminded me of back in the day when we’d be buying all the latest vinyl and aspiring to produce music. It’s been a while since I’ve been able to play a set across the board and feel like the selection has come naturally… 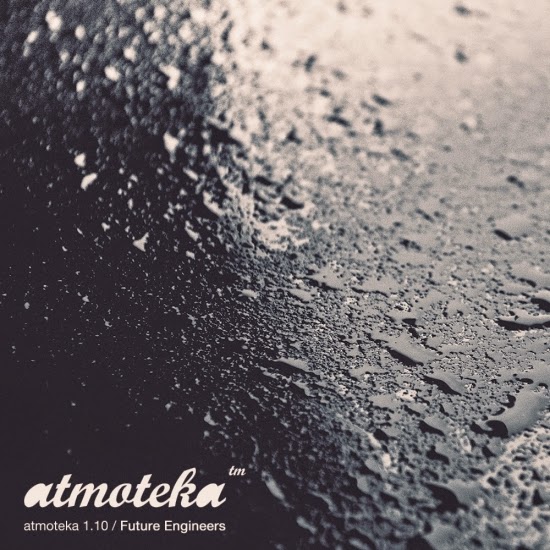 Lee Batchelor and Keir Cleminson are Future Engineers, a Glasgow based drum and bass production outfit, best known for their music that was released by LTJ Bukem’s Good Looking Organisation between 1999 and 2003, and also for the progressive, dance floor friendly DJ sets that they have performed across Europe.

They released their seminal 12” (“The Silence”/“Shattered”) on Renegade Recordings in 1997, quickly followed by popular material on labels such as Temple Records and Partisan Recordings. Almost 10 years since they first broke onto the scene, they have retained their reputation as a boundary-pushing and prolific drum and bass act. Their solid working relationship has been built on the foundations of a life-long friendship, having grown up together in North London and then Glasgow when Keir relocated there in 1990, followed by Lee in 1994.
From early childhood they were constantly surrounded by music – from studio sessions to live concerts – due to their fathers who were working together in the industry. Most notably, Keir’s father was lead guitarist in The Sensational Alex Harvey Band and Lee’s Father co-produced some of their albums (he also co-produced “Slide Away” for Oasis on their debut album “Definitely Maybe” years later!) As a result of this exposure and the uptake of musical and studio know-how, it was a natural choice by Lee and Keir to pursue a similar career to their fathers.
As teenagers in the 1990s, they listened to London’s pirate radio stations, following the progression of early Hardcore through to Hardcore Techno, Jungle Techno, Jungle and then Drum and Bass – learning the sounds along the way with a view to producing material of their own in future. When Lee moved to Glasgow, bringing with him some studio equipment that he had collected, the pair began to experiment in writing a variety of styles of drum and bass. But it wasn’t until they heard LTJ Bukem’s first Radio One Essential Mix in July 1995 that they identified the kind of sound they were most interested in creating, and tailored their approach in the studio accordingly. Around this time, they also befriended a fellow Glaswegian drum and bass producer, KMC, who had built up a good reputation (and knowledge of the scene) outside Scotland, and he encouraged them to relinquish a demo DAT in order to start the process of getting material signed to record labels.
The relationship with Good Looking Records began in 1999 when LTJ Bukem selected a track entitled “Timeshift” to be part of the third volume of his legendary Progression Sessions mix CD series. It was an instant fans’ favourite due to the futuristic synths and technological vibes that would become two abiding ingredients of Future Engineers’ sound. In the ensuing years, the duo released tracks on a variety of labels under the Good Looking Organisation umbrella – such as PHD’s Ascendant Grooves, Tayla’s Nexus Records and Blame’s 720 Degrees. The latter proved to be a particularly significant outlet for them within the Good Looking camp and their 12”s, “Changes in State”/”Rogue Comet” and “Momentum”/”Organism” played no small part in the fast growing reputation of that particular label.
By 2001 they were so highly regarded by the Good Looking Organisation, having almost all of their new music picked up by the labels within, that Lee and Keir accepted the offer to sign an exclusive artist contract. In addition to agreeing a structured release schedule, this presented an opportunity for Future Engineers to showcase their DJ talents at some of the Progression Sessions nights throughout Europe. It proved to be a good year for the Engineers; a track entitled “Merge” was selected to appear on MC Conrad’s Logical Progression Level 4 CD, and the boundary pushing, dance floor shaker “Echo-Location” was one of the highlights of LTJ Bukem & MC Conrad’s Progression Sessions 6, recorded live in the USA. 2002 saw the release of the “Technetium EP” – four slices of hard-edged, techno-orientated, atmospheric drum and bass – which was widely acclaimed by fans and music critics alike. This actually turned out to be the penultimate Future Engineers release on Good Looking Records – the last being a remix of Pariah’s “Midnight” in 2003.
Almost three years later, in early 2006, despite a lot of support and guidance from LTJ Bukem, MC Conrad and the rest of the Good Looking Organisation over the years, Future Engineers’ request to terminate the exclusive contract they had signed with them was accepted very amicably. This event marked the beginning of a new era and they did not hesitate to make their mark on the scene once again, releasing the popular “Down-Time” and a remix of Matizz’s “Through My Eyes” on Camino Blue Recordings, and a three track plate (including the much anticipated “Eon”) on Covert Operations Recordings. 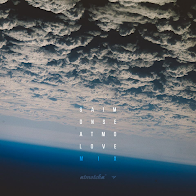